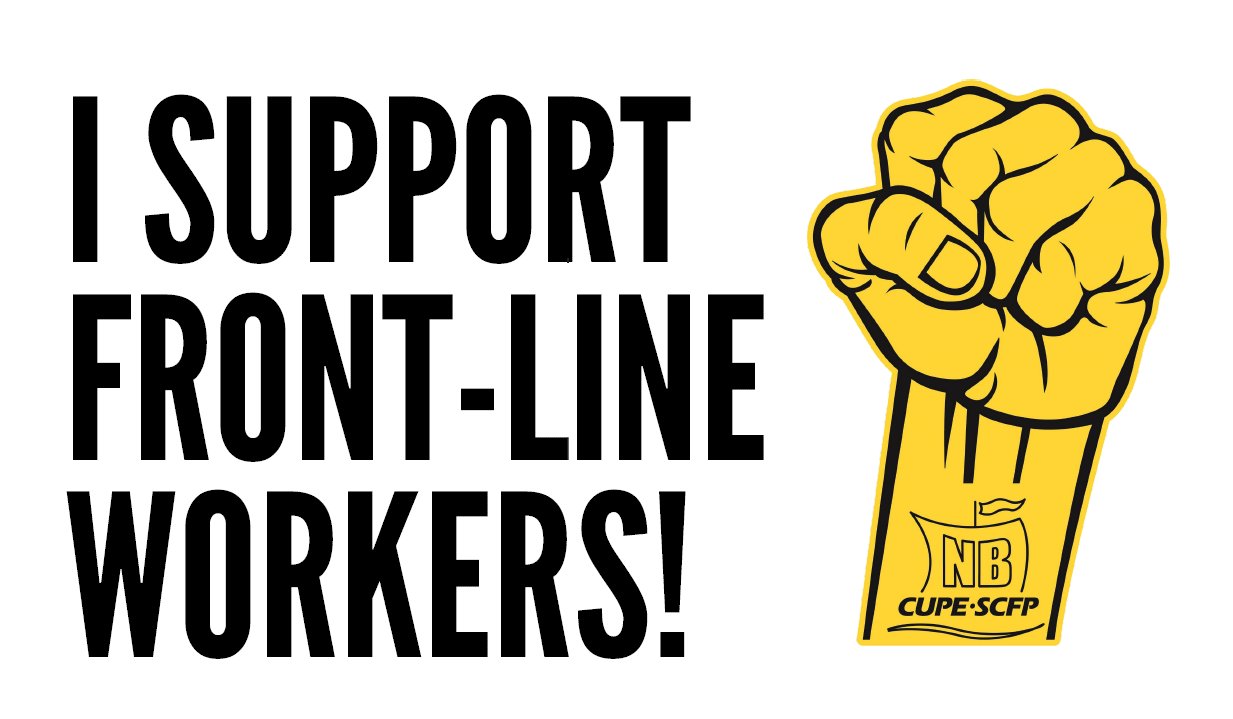 We, the undersigned, on behalf of our respective organizations, declare our full  support for the ten  CUPE locals and nearly 22,000 public sector workers in New Brunswick currently positioned to strike. In every local, workers have voted overwhelmingly in favour of this option, with YES strike votes ranging from 83 to 98 per cent. While Premier Blaine Higgs has tried to drive a wedge between rank-and-file workers and their elected leadership, these strike votes show that workers stand behind their bargaining team and have had enough.

The strike is a last resort in the long road of collective bargaining with the provincial government. Despite attempts by CUPE negotiators to reach a last-minute deal with the province, including reducing wage increase demands, the Higgs government walked away from the bargaining table on Tuesday.

Workers have done all they can to get successive New Brunswick governments to pay attention to the understaffing crisis created by 12 years of repressed wages. Workers have tried to bargain in good faith multiple times, and they have organized a year-long mobilization to draw attention to wage stagnation in the public sector.

Premier Higgs has pushed for wage freezes even as workers fought back the second wave of the COVID-19 pandemic. The Higgs government has resisted  any raises for essential workers “because COVID-19 had pushed the province into a precarious financial position,” yet the province has registered its 3rd surplus in a row. In 2020-2021 alone the government surplus was $409 million dollars. This year, even by the government’s own low estimates, public finances will be in a 4th consecutive surplus.

The Higgs government has also had unprecedented access to federal support for social programs. Instead of using federal funds as an opportunity to mend our beleaguered social safety net, help front-line heroes, protect communities, and generate a stable, durable economic recovery, the provincial  government has given out $100 million in power tax breaks to profitable pulp and paper mills, and it has failed to collect $200 million in royalties at a time when lumber prices hit an all-time high.

Workers have not stopped working during the pandemic. The workers now ready to strike have been on the front lines of the battle against COVID-19 from day one, and have even signed mobility agreements to make it easier to deploy workers to pandemic hotspots. But public sector workers are also burning out: forced to work for less money every year, providing more services, under a government that treats them with hostility. The act of withholding their labour through a strike is the only tool workers have left to bring the Higgs government back to the table, have their dignity recognized, and save the public service.

In a final insult to the workers who have helped keep us safe during this pandemic, Premier Higgs has threatened to use emergency powers to break a strike and force CUPE workers back to work. This sets a dangerous precedent for labour rights in our province and across the country. Higgs’s rationale for forcing workers back to work is that the strike will negatively impact New Brunswickers, but he continues to refuse to address the root causes of a recruitment and retention crisis in our public services caused by his own policies and decades of low wages for workers.

We want Premier Higgs and all MLAs to know that our organizations and the people of New Brunswick have confidence in our public sector workers and stand with them. When they  strike demanding that these problems be addressed, they are striking for all of us.